If you are a visitor to Hawaii or a student pilot you need to familiarize yourself with the procedures for VFR flight routing to Honolulu airport, and some of the quirks and complications that can arise when things get busy or the weather goes murky. No reason to panic, as long as you have a plan ‘B’ and you understand what to expect from ATC.

The design of arrival procedures and approaches, both instrument and VFR, is dictated by the proximity of mountainous terrain just north of Honolulu airport. During trade wind conditions (north-east winds) runways 4 and 8 are in use, both of which allow unobstructed approaches from the ocean side, but the departure end of both runways points to a 3,500 ft mountain ridge only a few miles away. This becomes an issue during missed approaches and when wind conditions necessitate the use of runways 22 and 26, respectively. The latter situation occurs especially ahead and during cold front passage and is generally referred to as “Kona conditions”.

The FAA Pacific Chart Supplement lists a total of five different VFR arrival procedures, two of which are of exclusive use in tradewind conditions, and one that is used only for arrivals on runways 22L and 22R. The following description is designed to help the reader understand the traffic flow under various conditions. It is imperative that you familiarize yourself with the most recent incarnations of these procedures in the Pacific Chart Supplement in printed or electronic form. VFR arrival and departure procedures are described under ‘Area Notices’.

Honolulu has some unique challenges in its runway configuration and short short procedures; please refer to this article for more information.

Air carriers operating from runways 4 and 8 follow departure and missed approach procedures that basically turn them away from the mountains to south-easterly headings soon after departure. This leaves a relatively narrow corridor between the city and the mountain ranges east of the airport, and another between the approach path to runway 8 and the Waianae mountain range to the west. Basically, these corridors are used for both departing and arriving VFR traffic. These limitations explain the altitude restrictions of 1500 ft for exiting traffic, and 2000 ft or higher for arrivals. Two main points of convergence for aircraft operating under VFR are the H1/H2 interchange north of Pearl Harbor (easily identifiable by two very tall apartment buildings and the highway connecting the north shore with the main east-west highway), and the vicinity of the Koko Head VOR (CKH), which demarcates the VFR arrival and departure gate in the east. It is obvious that movements close to these traffic hot spots demand the utmost attention from pilots. Congestion at the airport for whatever reason will cause ATC to instruct VFR pilots to hold over the H1/H2 interchange or in the vicinity of Koko Head VORTAC and to ‘remain clear of Class Bravo airspace’. Multiple aircraft may find themselves at the same altitude in a very small slice of airspace. The H1/H2 interchange in particular is the focus for aircraft arriving from the north shore of Oahu, training flights returning from the ‘practice area’ and from Kalaeloa (PJRF).

Remember: ATC will issue radar advisories and provides traffic separation solely for aircraft operating under IFR and to VFR aircraft only when workload permits. The approach controller may advise “multiple targets in the vicinity of the H1/H2 interchange”. This is the time to make a positive decision to get away from imminent danger. 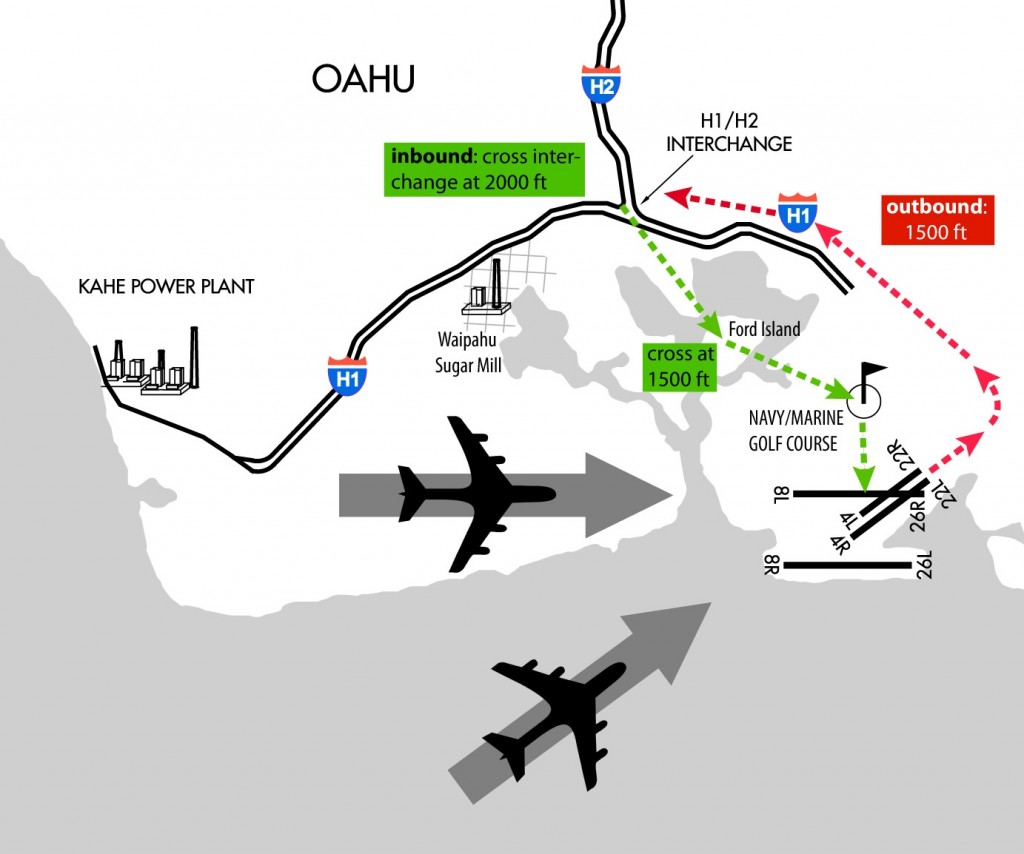 Schematic depiction of air carrier and general aviation traffic flow west of PHNL during tradewind conditions, showing VFR aircraft exiting via the REDHILL DEPARTURE and arriving via the NORTH ARRIVAL  procedure. The WEST ARRIVAL is a modified procedure beginning at the Kahe Power Plant and merging with the NORTH ARRIVAL. For illustration purposes only, not to be used for navigation. Always check the AF/D for the most recent procedures.

VFR pilots arriving via the FREEWAY arrival procedure from the east will be given a 2000 ft altitude restriction to allow departing traffic over the freeway at 1500 ft. The handoff from Approach Control (answering to “HCF Approach”) to the tower controller occurs in the vicinity of Punchbowl crater, a prominent landmark just north of downtown Honolulu and the site of the National Memorial Cemetery of the Pacific. 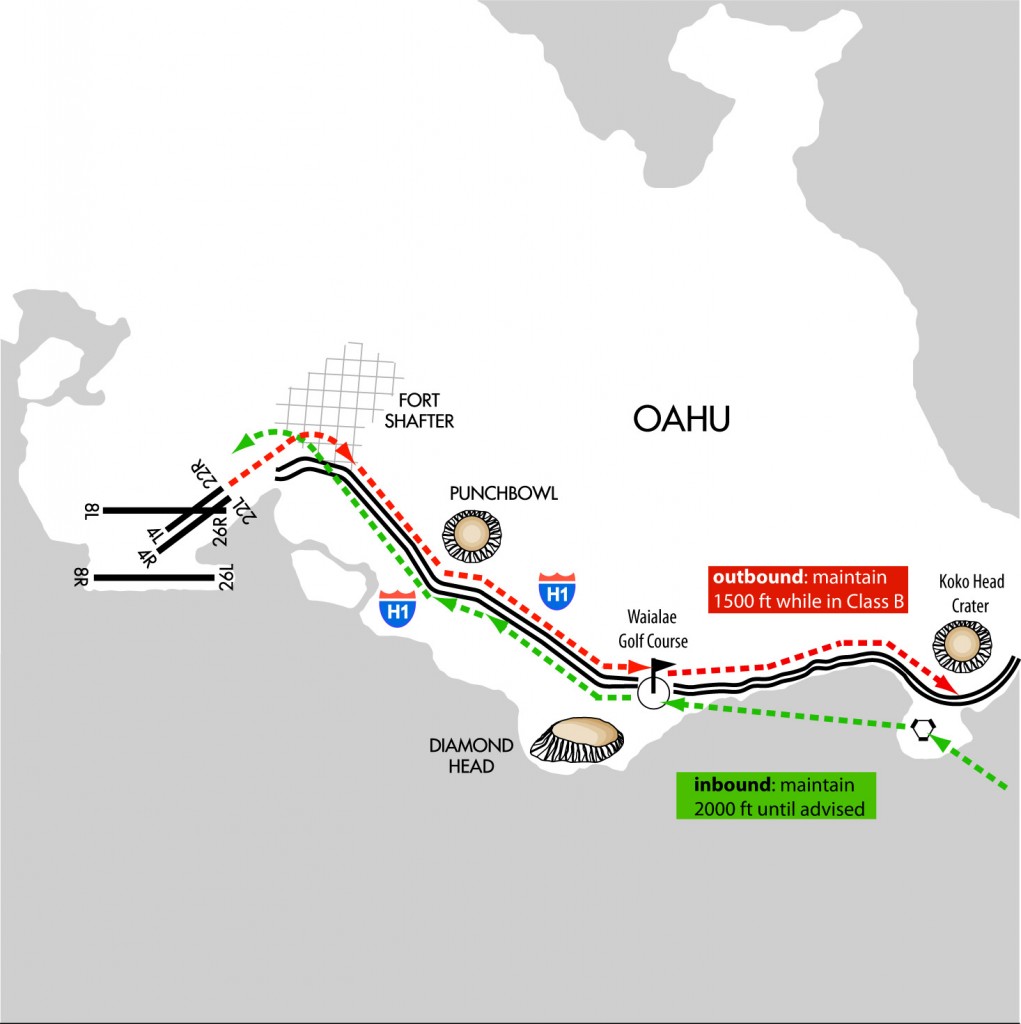 Schematic depiction of VFR departures and arrivals east of PHNL via the FREEWAY DEPARTURE and the EAST ARRIVAL, respectively. For illustration purposes only, not to be used for navigation. Always check the AF/D for the most recent procedures.

Depending on whether there is VFR traffic departing from runway 4L or 4R the controller may simply answer your call with the word “continue”. This implies that you may expect traffic below you. The controller wants you to maintain 2000 ft and enter the left downwind for the runway you were told to expect (almost certainly Runway 4 Left). Once you cross Runway 8L/26R the controller is likely to issue a landing clearance (which implies the altitude restriction is lifted) or issue a clearance for “altitude at your discretion” without a landing clearance. Since the last clearance from HCF approach probably cleared you to a left downwind for runway…. that’s as far as you may proceed without further instructions. You may find yourself abeam the threshold of the runway without a release from the altitude restriction. So, once the landing clearance is issued you may be forced to do a slam-dunk to lose 2000 ft in a rush. Both pilots and especially reciprocating engines hate this, because of shock-cooling the engine (which can crack the crank-case), and because you may be landing on a strong trade-wind day, which adds a few knots to your groundspeed along the downwind leg leading to a shallow descent, only to deliver a whopping sink rate on final, where you may regret an earlier decision to use all the flaps your airplane can deploy. Remember, you have the right and obligation to refuse something you cannot accomplish safely. Ask for an extended downwind to set yourself up for a less extreme descent if you are uncomfortable. Remember, the primary purpose to keep you at 2000 ft is departing (or sometimes arriving) traffic. An added complication may arrive in the form of traffic on the parallel runway (Four Right), which may cause the controller to ask that you to extend the downwind until the traffic has passed you, followed by a landing clearance. It is difficult to anticipate these events since you don’t see what the tower controller has on the radar screen in front of her. Having a plan with the wind conditions in mind and anticipating ad hoc changes to your clearance will make you more comfortable in this environment. 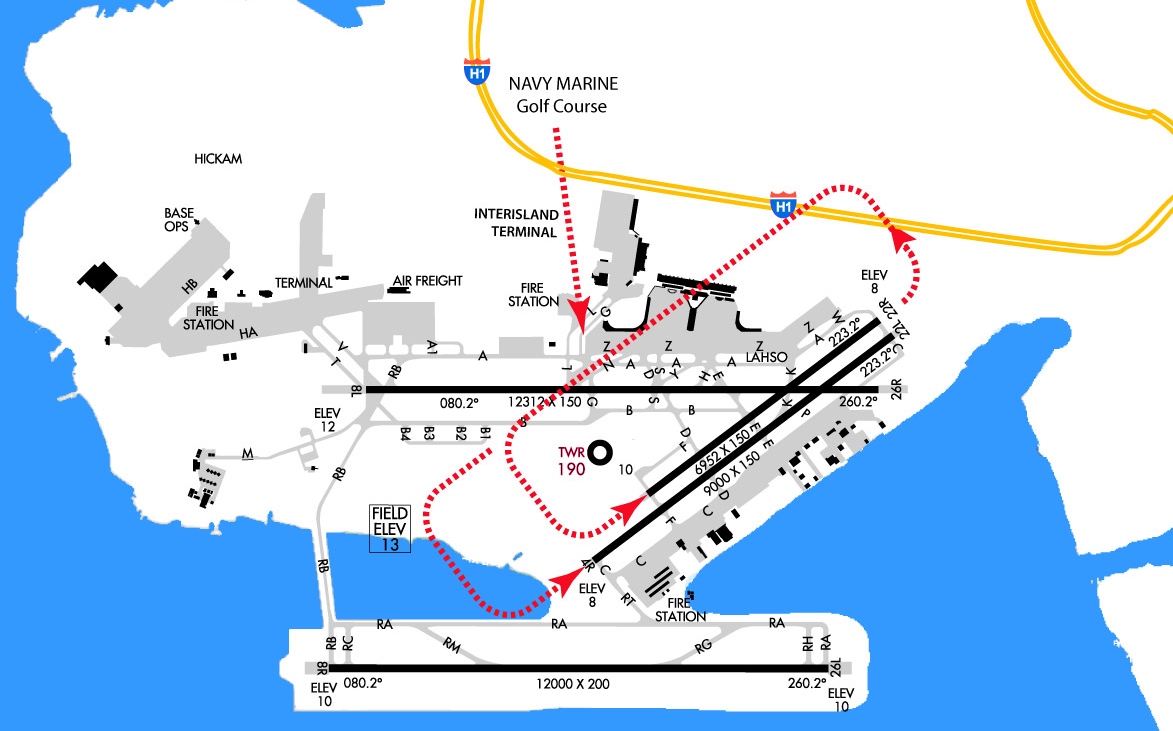 VFR traffic pattern entry for runways 4L and 4R from the “Navy Marine Golf Course” and the “Interisland Terminal”. Note the location of the Control Tower and Taxiway Delta as visual cues to planning the downwind leg. The downwind leg must cross runway 8L at taxiways G/L. Maintain pattern altitude while overflying runway 8L and avoid overflying the ‘Reef Runway’ 8R by staying north of taxiway RL. For illustration purposes only, not to be used for navigation. Always check the most recent AF/D for procedural updates.

You may also expect last minute changes of the assigned runway to land on, which may lead to confusion and contribute to a possible violation. I advise against major heading changes below 400 ft and your response can be “unable”. If you make a mistake as a consequence of accepting a clearance that you are unable to handle in every detail, the fault is still with YOU!

Arrival Procedures for Runways 22 and 26

Kona wind conditions potentially pose the biggest problems to controllers and pilots alike since they leave a single instrument procedure for air carriers, the LDA 26L approach. This procedure directs aircraft close to and parallel to Waikiki beach before taking a left turn towards the assigned runway (see figure for a schematic view). VFR traffic approaching PHNL will be cleared for the KONA ARRIVAL procedure, which directs pilots to fly direct to Koko Head prior to reaching NORBY intersection from the east, thence proceed to the Waialae Golf course. From there, VFR aircraft will follow the H1 freeway to a base leg for runway 22L or 22R. It is obvious that lateral separation between VFR aircraft and IFR flights on the LDA approach is minimal. When cloud bases are above 2000 feet and the visibility is good, this does not pose a problem. However, when the cloud deck is below 2000 feet and visibility impaired, the VFR arrival becomes a challenge. Since ‘Kona conditions’ are a characteristic of frontal passage in Hawaii, southerly winds often come with low ceilings, rain, and poor visibilities. If the ceiling drops below 2000 ft you may have to ask for an amended clearance at a lower altitude as long as it is within the cloud clearance and visibility minima for Class B airspace and above the altitude minima for flight over congested areas (§ 91.119). 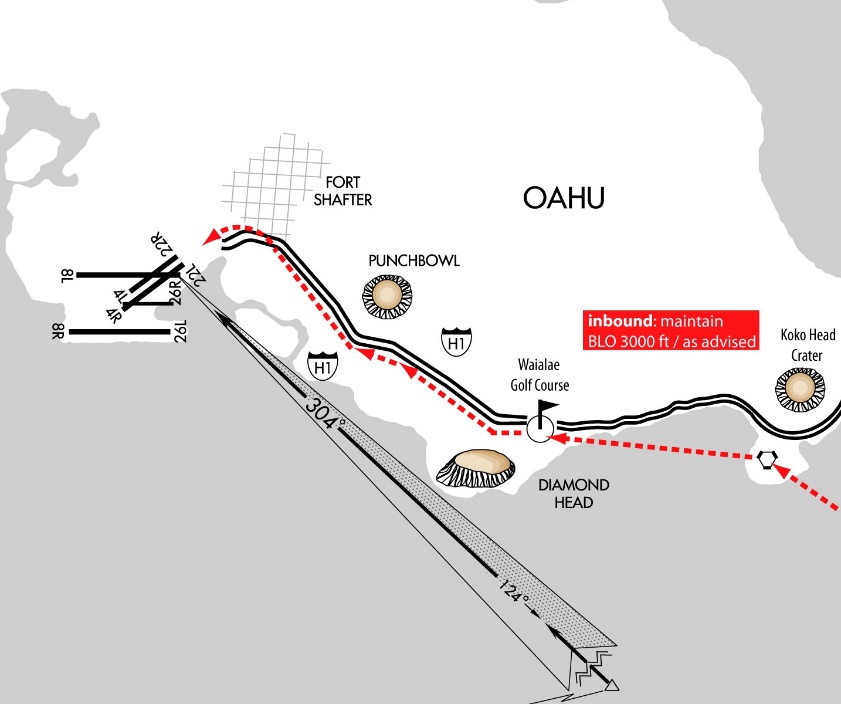 Schematic depiction of the KONA ARRIVAL procedure in south-westerly wind conditions. A section of the LDA instrument approach to runway 22 and 26 is shown in relation to underscore the importance of following the prescribed approach at all times. For illustration purposes only, not to be used for navigation. Always check the AF/D for the most recent procedures.

In Kona weather conditions, departing VFR aircraft will be led away from the airport to the south (KONA DEPARTURE) or to the west (WEST LOCH DEPARTURE), which means that there is no eastbound exiting traffic over the Kalanianaole and H1 Highways that are the best landmarks for the KONA ARRIVAL. However, if you find yourself flying into marginal conditions and near mountains obscured by clouds, a deviation to the south is pretty much out of the question. Hopefully, you will not be in this position, but if you are, ask for help from ACT before you try to ‘feel’ your way to the airport next to mountainous terrain. 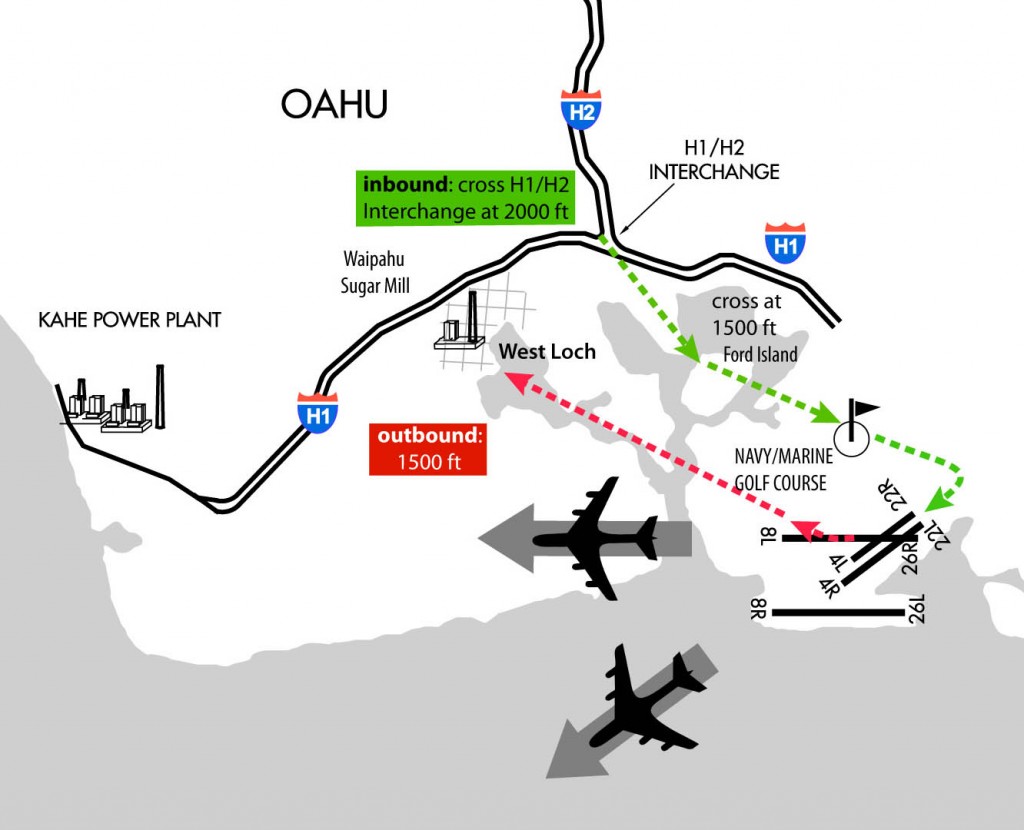 n.b.: Graphics in this post were generated by extensive modification of NACO visual approach plates and are for illustration purposes only. They are generic in nature and neither officially approved nor to be used for navigation. Information on this page may not be up-to-date, for which reason the identifying version of the procedures (e.g. REDHILL ONE, TWO, etc) were omitted from the descriptions.  Always consult the most recent charts and supplemental information, and obtain a briefing.