Over the past decade Maui has become increasingly busy as an international airport that is frequented by airlines from Asia, the entire continental US, and from Canada. In addition, Kahului airport is a general aviation hub for private jet traffic and for helicopter excursions around the island and to Molokai.  Integrating general aviation traffic with the constant stream of airliners is a challenge for controllers and defines the established procedures for VFR arrivals in Maui.

Kahului Airport (PHOG) is the only airport in Hawaii with Class C airspace, which requires no formal clearance to enter but you need to establish positive communication, e.g it is not sufficient to just broadcast your presence and intentions but the approach controller needs to acknowledge your call. Expect a transponder code assignment after you initiate contact with current ATIS information. A number of reporting points are shown on the sectional chart that provide controllers with a means to sequence arriving VFR traffic. BOLDMETHOD has a good review of the details of weather minimums and regulations pertaining to Class C airspace. The protected (controlled) airspace consists of an inner segment that extends from the ground to 4000 ft and 5 NM around the defining NAVAID (OGG VOR) and an outer circle with a 2000 ft floor that extends 10 NM around the center of the airspace. Approach controllers will try to keep transitioning VFR traffic outside that airspace unless you intend to cross over the airport directly. VFR approaches are designed to keep you away from traffic inbound to land on the instrument runway 02. There is intense sight-seeing helicopter traffic to and from PHOG at all times, especially in the north-west sector, and GA traffic on the south-east side where flight training is conducted.

If you arrive from the north-west on a trade wind day via the north shore of Molokai you are advised to get the current ATIS by the time to get to the east end of Molokai (Cape Halawa) and contact Maui Approach on 120.2 MHz. You will be able to see the west end of Maui island (Nakalele Point) which is a compulsory reporting point. The approach controller is likely to issue an altitude limit below Class C airspace (2000 ft or BLO) and will advise to stay in-shore since departing helicopter and other GA traffic will depart Kahului 1-2 Miles off-shore on outbound legs. 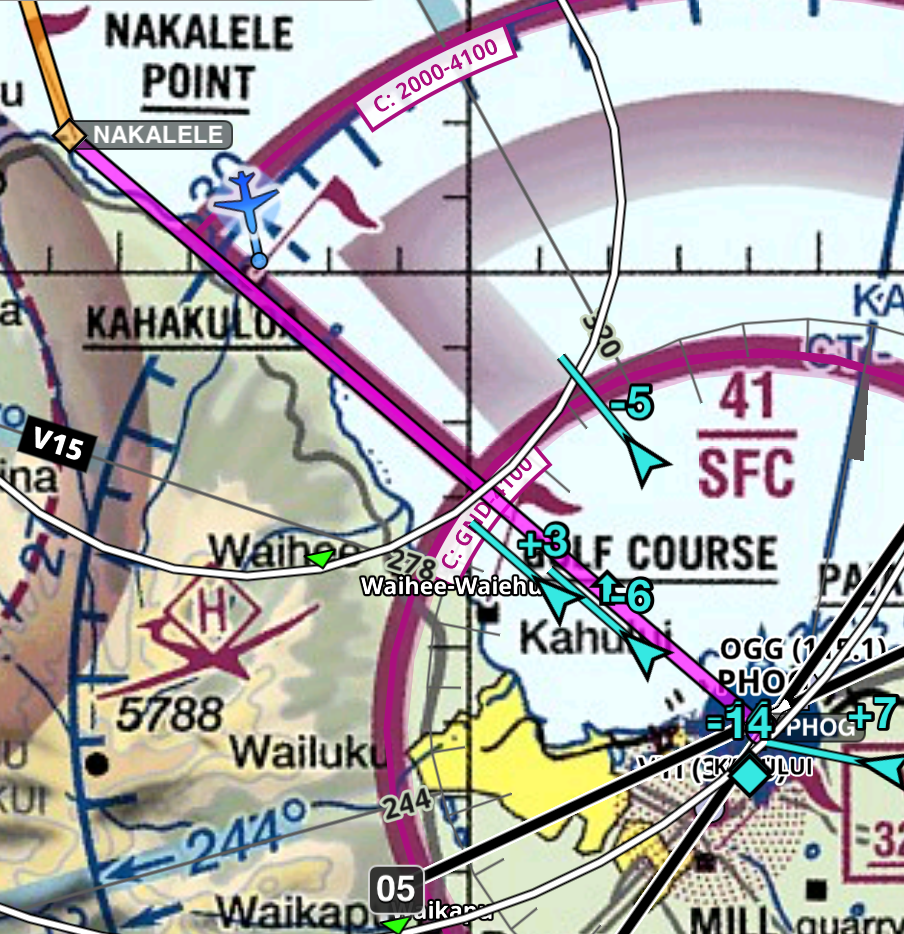 Real-life snapshot of outbound helicopter traffic from Kahului. Inbound traffic has to remain over the shoreline to avoid conflicts. If you are not familiar with the landmarks it is important to note that the most visible and prominent landmark is Kahakuloa and not Nakalele Point.

Once cleared to land you should aim for Kahului harbor which puts you on a base leg for Runway 05. The runway is parallel to the shoreline and easily identified. During rare Kona conditions you will likely receive a landing clearance to runway 20. Pay close attention to the taxi instructions once on the ground. Expect a sharp right turn onto taxiway Alpha or Bravo and a left on Foxtrott, which intersects Runway 02 and will get you to the east ramp once cleared. The airport diagram indicates an airport surface hot spot (HS-3) at the intersection of RWY 05 and taxiway Alpha. Aircraft landing on RWY 05 and instructed to exit on Taxiway A with a left turn onto Taxiway F to the east ramp, sometimes turn left onto Taxiway G by mistake. 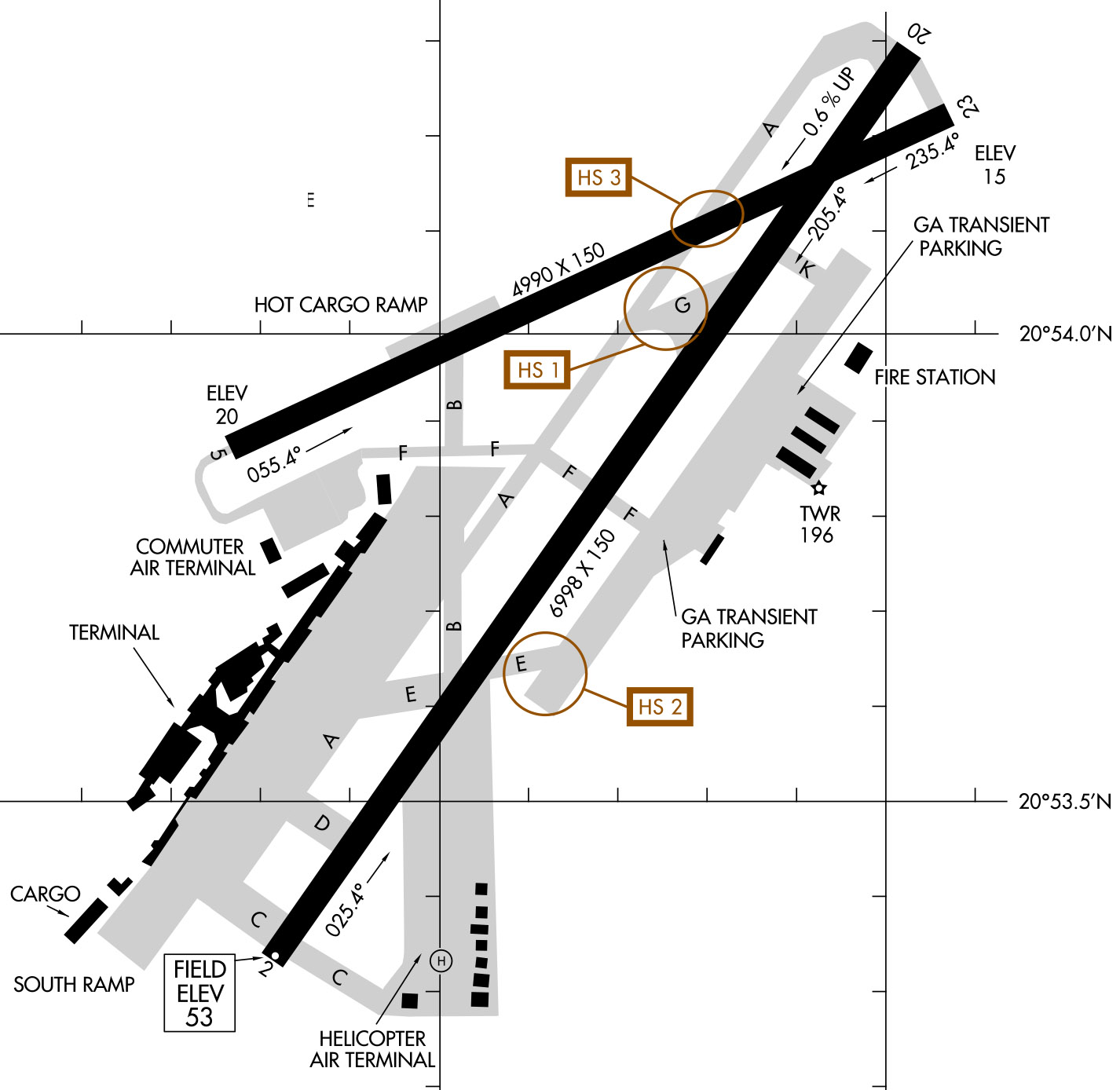 This video shows a typical  approach to PHOG from the north-west.

Contact Maui Approach on 120.2 MHz well before reaching ‘Opana Point’ with current ATIS information. Approach Control may not be able to see you on radar until you get closer to the airport depending on your altitude. On a trade wind day you will likely be instructed to enter a right downwind to runway 02.

During trade wind conditions all carriers arrive on runway 02 which is the precision approach runway. Approaching aircraft will be on a long final close to McGregor point (compulsory VFR reporting point) and close to the mountainous terrain of west Maui. 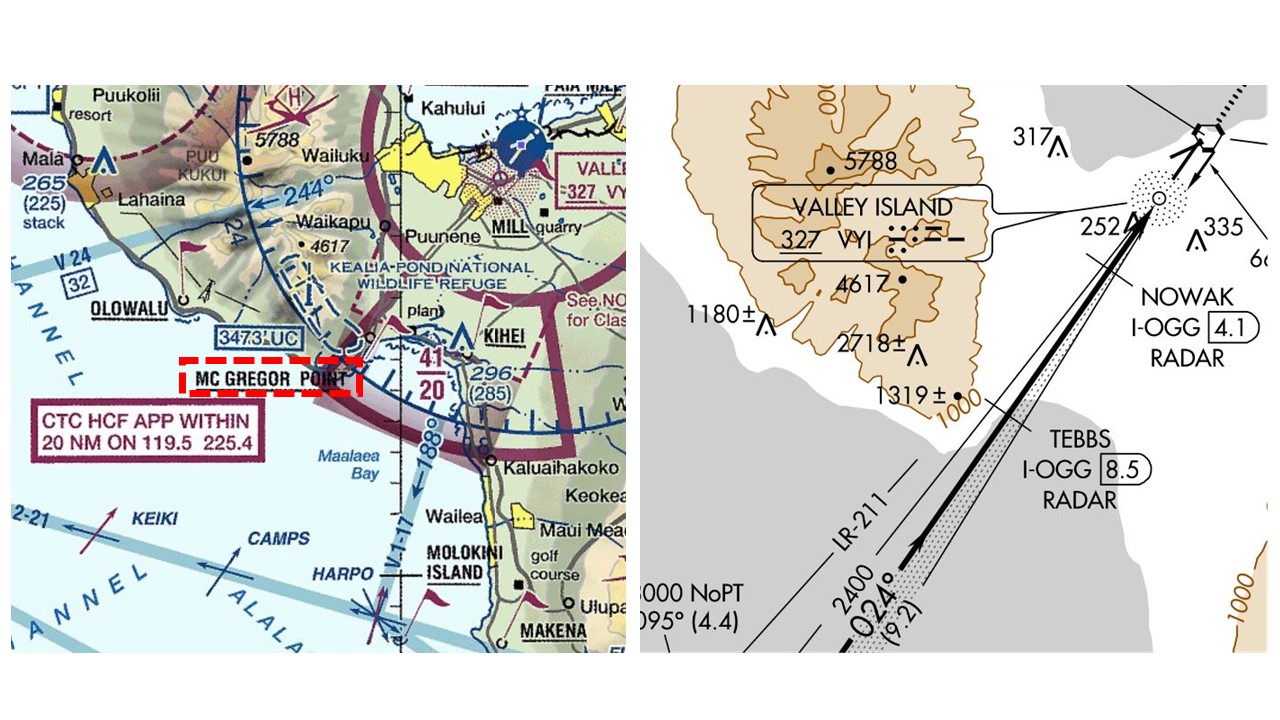 View of the south-west approach sector of Kahului airport on the VFR sectional chart and the corresponding area of the ILS approach chart to runway 02. The Mc Gregor reporting point is highlighted to indicate that it is essentially right underneath the instrument approach path. GA aircraft should expect to be instructed to stay well to the east and below the approach.

GA aircraft arriving from the south-west need to stay below Class C airspace. It is recommended that aircraft arriving from the south remain offshore, west of the OGG 175R until 11 DME before turning inbound to Kahului airport because of extensive ultralight operations. Note that there is a different approach frequency for south arrivals to Kahului (119.5 MHz). Also note the rectangular section of Class E airspace south of the airport, which implies that radio communication has to be established below the floor of Class C airspace before entering this sector (e.g. at ‘Kihei’ reporting point). There are ultralight, aerobatic, and GA training flights just outside Class C airspace on the OGG R175 radial. 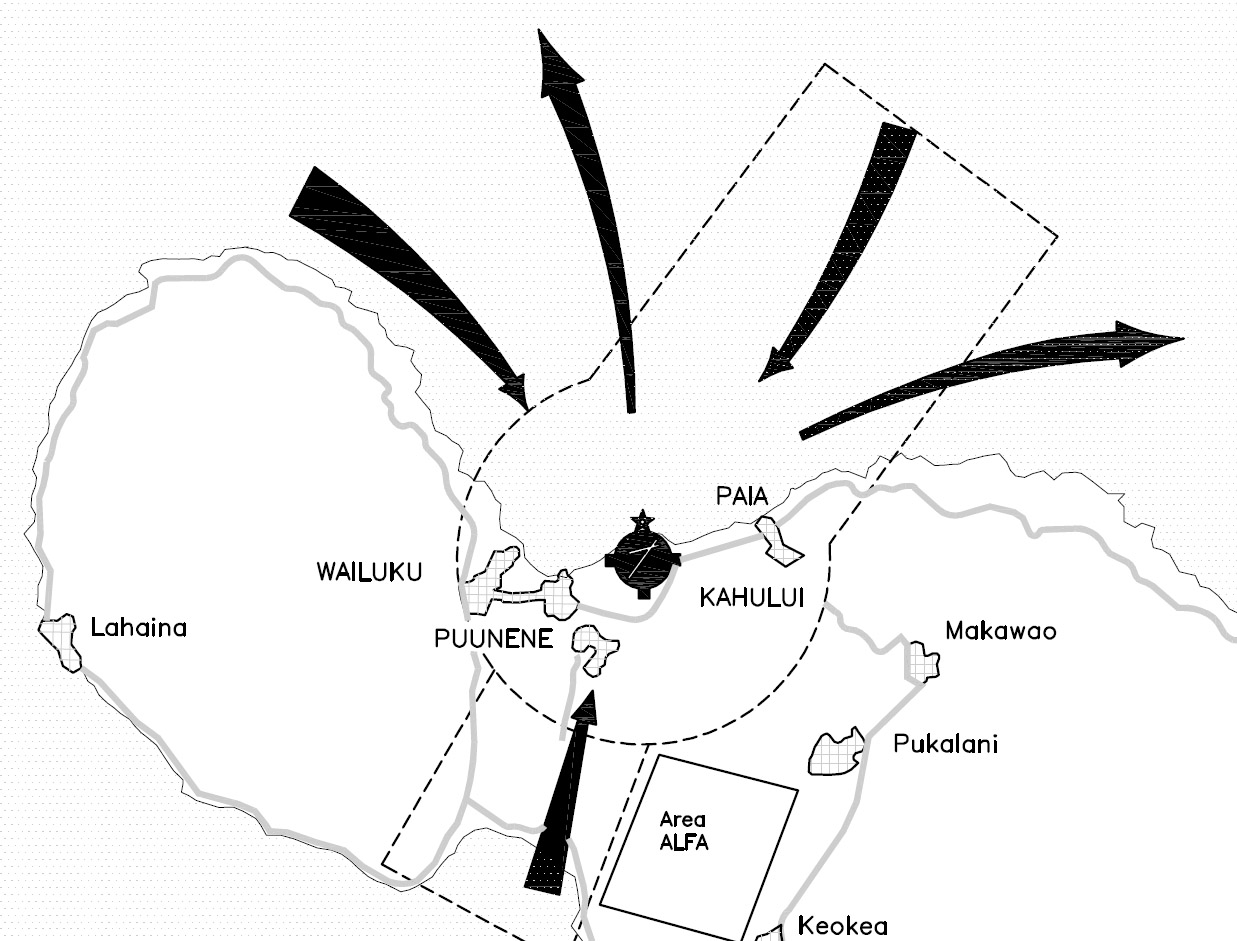 Departure and arrival routes to Kahului airport. Shown are the most heavily traveled routes for high performance aircraft arriving and departing Kahului Airport, Maui. Light planes pilots flying VFR in these areas should maintain an alert lookout and monitor HCF approach Control frequency. Aircraft transiting north of the Kahului Airport in VFR conditions are requested to to remain at least 8 NM north of the airport at or below 4500 ft if westbound. 3500 ft. if eastbound, or following the shoreline at or below 2500 ft. and be responsive to routing changes issued by HCF approach Control or Maui Tower. The area depicted as “ALFA” is a light aircraft local training area. Area is outside Kahului Class C airspace. Aircraft training in area normally operate at or below 3000 ft. and monitor HCF approach Control. (Text adapted from PAC AF/D).

Class C airports deliver departure clearances to VFR aircraft that include initial direction and altitude restrictions, Squawk code and departure frequency. For departures to the north-west or north-east expect an off-shore departure route and an altitude that will keep you below the floor of the Class C airspace. As pointed out earlier, inbound traffic will be kept over the shoreline to avoid conflicts. Southerly departures will be cleared to fly an initial south-easterly course at an altitude of 1000-1500 ft east of the field until clear of the helicopter operating area just east of the approach end of RWY 02 (see Area Notices in the A/FD) Class C airspace. It is wise to consider inbound traffic before climbing and turning west towards Honolulu by continuing to monitor HCF approach on 119.5 MHz.

Aircraft transitioning north of Kahului to or from Hana in a easterly or westerly direction will almost invariably be asked to stay outside Class C airspace (e.g. 10 NM north of OGG VOR). It is a matter of courtesy and common sense to talk to Maui Approach Control rather than just staying outside Class C airspace without talking to anyone, although legally not required.

Even for regular visitors of Maui the issue of parking your aircraft is often confusing. Kahului offers ample transient parking if you arrive in a private jet outside the holiday period. The area opposite taxiway F on the east ramp almost to the base of the control tower is reserved for these larger aircraft. If you taxi further north you will pass the T-hangars. Just two rows of the relatively small area between the last T-hangar and the fire station are considered GA transient parking. However, a number of resident aircraft are permanently moored there, also. Personally, I target parking spots that don’t have chocks or tie-downs attached as an indication that they are available to visitors. I have it on good authority that parking violations can incur a $ 300 fine. It is a little sad that the local FBOs don’t provide any services for local GA flights. Fueling is self-service at the base of the tower. Toilets are at the back of the second row of hangars. The guard controlled gate (AOA 5.3) is also at the end of Kuhea Street. In order to get in- and out of the airport you have to call security on 872-3875. This ain’t Molokai.

It is a little more challenging to get to the airport car rental center. In the good old days you could call the rental car company and ask them to pick you up at the general aviation terminal near the fire station. There would usually be an employee who knew what you were talking about. Since there is a new car rental center these days seem to be over. If you want to save time, call an Uber or Lyft and tell them that you are at Maui Aviators. The business is in the database and they are close to the gate. I have been lucky on the return trip. HERTZ found us a driver to take us back but they will invariably assume that you fly a Citation or something bigger and they want to drop you off at Landmark Aviation which obviously generates more business than the VFR pilots at the end of the street.

Note: Always consult the A/F directory and NOTAMs for updated information and always obtain a briefing before a flight beyond the vicinity of your home airport. Information provided here is not always updated in a timely fashion.