Fall and spring seasons in Hawaii bring with them characteristic wind shifts, aka “Kona conditions” which not only test your ability to handle cross-winds but cause implementation of necessary departure and arrival procedures that we rarely practice. The use of runways 22 and 26 creates issues that stem principally from the proximity of mountains just north of the airport, putting arriving VFR and IFR traffic close to the Waikiki shoreline.

The complications arise earlier than that, though. Ground and tower controllers have their hands full moving departing general aviation traffic on the south ramp to the east ends of runways 26R or 22 L, while landing airline traffic on runways 26L and 22L has to be routed across several taxiways and runways to their gates on the north ramp. If you park on the south ramp and you request a taxi clearance you will be given directions to either runways 26L or 22R via taxiway Charlie. The ground controller may have an intersection take-off in mind, which would be indicated by a hold-short instruction at taxiway Delta, Echo, Papa, or Charlie. Charlie essentially merges with the approach end of RWY26R, just east of the intersection with RWY22L. Since there will be a constant stream of arriving traffic for RWY22L and 26R you may find yourself in the middle of a parking lot waiting to move into take-off position. You may be cleared onto the runway with a “line up and wait” instruction with landing traffic in front of you on the intersecting runway 22L. To ease the congestion on the taxiways the ground controller may send you to the tiny taxiway Papa for a departure on RWY22L (you can reject an intersection departure if you need more runway and it may be a good idea to check the available runway length from these intersections in advance). A third option is an intersection departure on RWY26R from either taxiways Delta or Echo. This would make you cross two runways 22L and 22R before holding short of 26R. The taxi instruction for this procedure may sound something like this: “Speedbird 123 cleared to runway 26R at Echo via taxiways Charlie and Echo. Hold short of runway 22L at Echo.” While taxiing or when you arrive at Echo you will be handed off to Tower who will issue a further clearance to cross 22L and 22R: “Speedbird 123, cross runways 22L and 22R. Hold short of runway 26R.” If you are sitting on taxiway Echo, reference to the taxiway may be omitted from the clearance. If you are still taxiing on Charlie while the clearance is issued, ATC will specify “… cross runways 22R and 22L at taxiway Echo”.

In many years of flying out of Honolulu, I was only once sent to RWY26R in this manner: “…cleared to Runway 26R at Delta via Charlie, Foxtrot, and Delta. Hold short of Runway 22L at Foxtrot.” This required some thinking on my part: Delta intersects taxiway Charlie, so where does Foxtrot come into play? A quick look at the taxiway layout reveals that taxiway Foxtrot actually turns north-east to parallel runway 4L/22R and intersects Delta. Once we were facing RWY22L we were cleared to “…cross runways 22L and 22R. Hold short of Delta“. We gave way to a Caravan crossing in front of us on Delta after landing on 22L and we were given clearance to continue to the hold short line at RWY26R where we waited for the takeoff clearance. It seemed as if we had transited through two Honolulu suburbs to get there, and the whole process took well over 20 minutes, probably exacerbated by the closure of runway 22R on that particular day. In short, there are many ways for ground controllers to move aircraft into the right position for takeoff or to get them out of the runway environment once they have landed. The choice of assigned taxi routes is also determined by the ability of ground controllers to see aircraft in particular spots on the field. The A/FD chart supplement highlights critical areas that cannot be monitored from the tower. 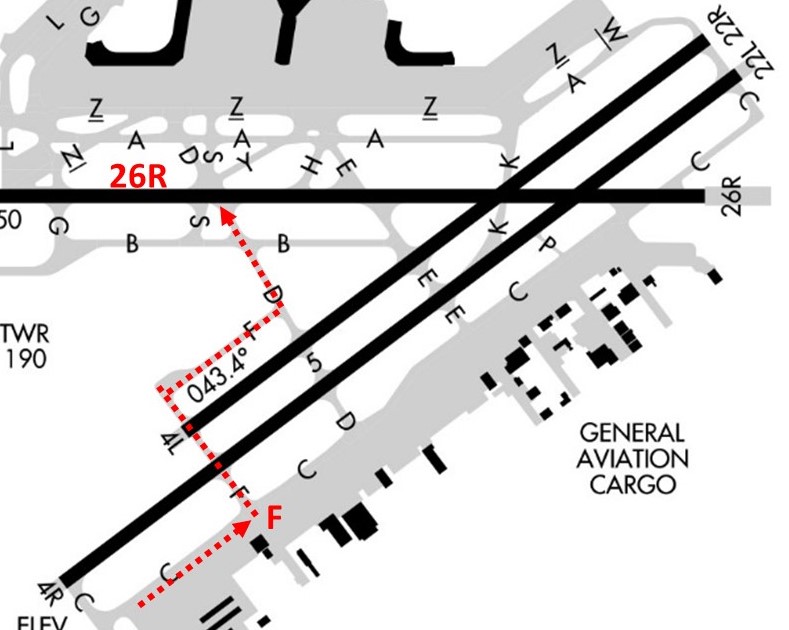 It may be a good idea to think through these scenarios before firing up the engine if you are unfamiliar with the airport or you have not flown in Kona conditions for a while. Read back all clearances and in particular, hold short instructions. Request ‘progressives’ or ask for clarification if unsure what ATC is asking from you.