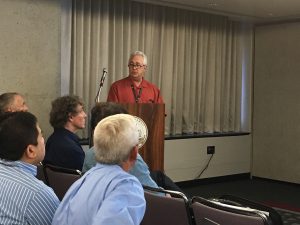 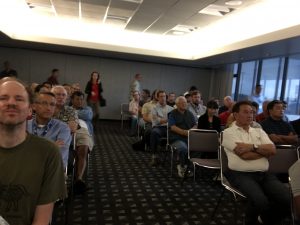 What a turnout of pilots and aviation supporters at this meeting!

There were approximately 130 people attending the meeting sponsored by the
FAA (Scott Allen of the FAAST organized the event). After introductions
by Scott Allen, Rich Wayne of HCF made the following comments:

• Initially use the full aircraft call sign when contacting HCF.
Afterwards, use your call sign (N12345) when reading back
clearances.

• We have had approximately 31 runway incursions this year.
Know the HNL “hot spots” and if uncertain of either where you are
or what the instruction was to you—ASK. Especially if you are
taxiing/ready for takeoff/land—ASK. If on the ground, STOP and
ASK.

• Runway 4R is the primary runway for landing (controllers can use
discretion) and plan to exit at TW D (or E). Do not use TW F
unless you see no one there AND that you ask ATC before turning
final.

• Keep the downwind leg for runways 4 to over taxiways L and G
near runway 8L at the TPA (be aware of traffic on 8L). Do not go
beyond TW RA. If too high or need longer downwind, alert ATC
ASAP in order for them to coordinate..

• Still a problem area: the hold short lines near runways 4 L&R.
When exiting runway 4L, stop at the first line which is the hold
short line for runway 4R—yes you are blocking runway 4L but it
is okay.

• The “line up and wait” procedures for runways 4 L&R and 22 L&R
are currently suspended but may be re-introduced soon. The
cancellation of this procedure was mostly due to increased
runway incursions.

A short presentation was made by Juan Reyes of the FAA ADO and
covered:
• The need to stop runway incursions.
• Trying to move GA to JRF to reduce the mix of airplanes
• Designate a helicopter operating area.
• Adopt ADS-b squitter
• Reduce the number of aircraft at HNL without airport permits
• Remove all abandoned/derelict aircraft from the airport
• Relocate the Trans Air B737 operations.
• Eight new hangars are scheduled for JRF by 2017. The HNL FAA
ADO office is pushing to get hangar 111 fro UH to HIDOTA.

FAA Regional RSAT manager, Joe Santoro commented on the need of
everyone to mitigate RIs.

A lot of good questions and answers followed.

There was an earlier meeting of the HNL RSAT attended by selected
users. Ross Higashi made the following comments:
• MUST stop RIs at HNL or we may loss FAA funded and that is not
happening on his watch.

• HIDOTA is developing a video for RI problem areas at HNL.
Should be out in June 2016—distribution still being worked
(GACH did offer use of their web site to post the video).

• HCF is developing new guidance to use only 90 degree taxiways
(to the runways) for entering/exiting.

• HCF is also reviewing the letter of agreement for LAHSO—
changes may be in the future.

• If you as a GA pilot see something wrong, use the NASA reporting
form to communicate. (FAA may develop a different form in the
future).

• Roy Sakata announced that the media may attended the 1800
hour meeting.