The FAA has been surprisingly swift to approve a variety of electronic gadgets in the cockpit to legally replace printed products such as sectional charts and approach plates. I know pilots that fly their aircraft mainly by reference to a smart phone display, practically ignoring the ‘steam gauges’ that make it legal to operate the aircraft under instrument conditions. AC 120-76B defines the operational details of portable electronic devices, or ‘electronic flight bags’ and under what circumstances they can be used to replace paper products.
Nobody denies that GPS technology paired with ‘smart’ tablet moving map displays can get you to your destination more efficiently than any VOR receiver. Expectedly, however, this paradigm works only as long as the gadget has a power power source and is functional. True: the same applies to a GARMIN G1000 and comparable cockpit glass displays. However, these systems have been designed around various failure scenarios and are unlikely to completely leave you in the dark. Tablet displays designed for everyday use do not have to comply with these demands. As a GA pilot operating under Part 91 you ‘self-certify’ the equipment and app you are using to replace printed charts.

The complexity of electronic navigation and aircraft control implies that there will be situations where combinations of pilot inputs produce unexpected results: you are experiencing automation surprise! While in IMC you are unlikely to be in the mood to review the + 300-page instruction manual and you need to get to the last known and reliable indication of your position quickly. Hopefully, you know the knobology of your favorite app by heart, which will get you back to at least a map view of your position.

Both personal experience and on-line reports prove that tablet devices can go on the blink with little advance warning and take an unacceptably long time to recover from failure.

A common problem appears to be overheating of iPads in the cockpit. The processor will alert you courteously that it will shut down for an unspecified amount of time, and that’s that. The problem appears to be both the hot environment of the cockpit as much as the simultaneous operation of multiple apps and especially the G3/G4 cell phone and data connection. While in the air, the iPad will continuously look for cell phone towers, which over-extends the processor and also uses excessive power.
When using an iPad for navigation, it is recommended to set it to ‘Airplane Mode’ (Settings menu), and then turn on either the wireless network or bluetooth function to communicate with an external GPS/ADS-B receiver (wireless network for Fore Flight-STRATUS II and bluetooth for FlyQ – DUAL and others, respectively). Also, turn off all other apps that are not needed for in-flight functions. Need I say that reading your email while piloting an aircraft is a violation of the FARs? 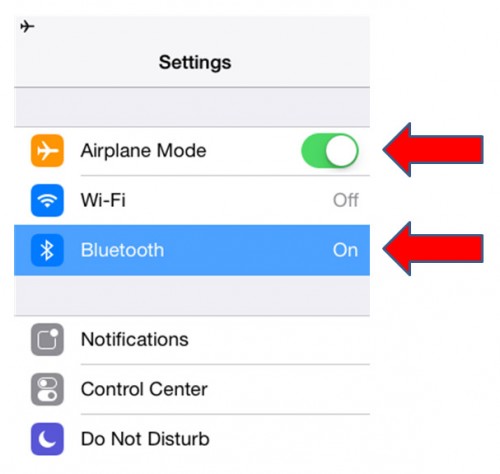 To disconnect your iPad or iPhone from the cellular network while still receiving GPS position and other information from an external receiver, put your tablet into the ‘Airplane Mode’ and then engage either the Bluetooth function or the Wi-Fi network (e.g. for Stratus II) under the ‘Settings’ menu.

On a related note, both GPS/ADS-B receivers and the iPad utilize a fair amount of power that will allow use of the device for approximately 4 hours before a re-charge is necessary, unless your aircraft has a 12V cigarette-lighter outlet and you have a dual-USB charger that delivers 2 Amp of power. I always carry a spare battery, just in case. This could be a small Li-ion backup battery (check out AMAZON for a variety of brands and options, I carry an ANKER 15000 mAh compact battery backup), or a larger sealed lead acid gel battery, such as those used by wedding photographers for strobe photography. A battery backup (and the necessary connector cable !) may get you out of a tricky situation for a relatively small investment.