In the Winter 2014 newsletter, I talked about trade winds and briefly touched on trade wind inversions.  Inversions have a big impact on the weather we see in Hawaii, and knowing more about them may be of interest to pilots.

What Is An Inversion?

Temperature normally decreases with height in the atmosphere.  (The higher you go, the colder it gets.)  For dry air, the temperature drops about 5.4°F for every 1000 feet, or about 9.8°C for every kilometer.  An inversion is a layer where the temperature either remains the same or increases with height.  It is the result of an outside force, such as a change in airmass along a front where warm air overruns cold air.  The typical driving force we see in Hawaii associated with the trade winds is due to sinking air associated with high pressure systems.

Wind in a high pressure system spirals away from the center, and air from higher in the atmosphere must sink to take its place.  As this air sinks, it warms and dries, which leads to the clear weather typically associated with a high pressure system.  (Because inversions form as air subsides, trade wind inversions are also referred to as subsidence inversions.)  In Hawaii, high pressure is usually located northeast of the state.  Subsidence is greatest near the center of the high, which leads to a stronger and lower inversion.  As the air moves away from the high, it picks up heat and moisture from the ocean, which leads to a weaker and higher inversion.  Below are two upper air soundings taken at the same time.  The image on the left is from California, closer to the center of the subtropical high.  The image on the right is from Hawaii, after the air has traveled across the ocean for several days.

Properties Of An Inversion

Because an inversion limits how far air can rise, it plays a big part in how strong convective clouds and showers can become.  When air is forced upwards, whether along a front, a sea breeze, or by the terrain of the islands, it will keep rising as long as it is warmer than the air around it.  An inversion limits how far it can rise, providing a limit on how strong showers will be.

Upper air sounding from Hilo at 2pm HST on 6/8/2016. An inversion is located just below 800 millibars, which is between 6,000 feet and 7,000 feet. Image courtesy of the upper air archive at the University of Wyoming.

The average trade wind inversion height in Hawaii is around 7,000 feet.  The inversion may be lower, due to sinking air closer to the state, which would lead to lighter showers or, in the case of a really low inversion, just some clouds but no rainfall.  The inversion may be higher due to an upper level trough, which would lead to heavier/more intense showers.  If temperatures in the middle of the atmosphere are cold and the inversion erodes completely, we may see very heavy showers or thunderstorms.

Since the average inversion height is lower than our tallest mountains, many times the lower slopes will be cloudy but the summits of Haleakala, Mauna Kea, and Mauna Loa will be clear.  At times you can also see the summit of Hualalai. 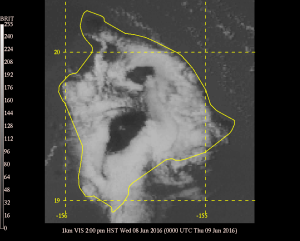 The visible satellite image at right is from 2 pm HST on 6/8/2016.  The upper air sounding above it was launched from Hilo at the same time.  The sounding shows an inversion between 6,000 and 7,000 feet, with dry air above it, which leads to the lack of clouds over the summits.  A loop of satellite images of the full day is available here; you can see skies starting out mostly clear in the morning, then clouding up–at least across the lower slopes.

Upper air sounding from Lihue at 2pm HST on 5/13/2016. Winds are out of the northeast below the inversion, and out of the west-southwest at and above the inversion. Image courtesy of the upper air archive at the University of Wyoming.

Because an inversion limits how high air can rise, it effectively puts a cap on the height of thermals.  Winds may also be from a different direction above the inversion.  Trade winds are relatively consistent out of the east-northeast, and are located below the inversion.  Above the inversion, the wind direction is driven by the middle and upper level weather patterns, and at times are from different directions.  The sounding at right is from 2 pm HST on 5/13/2016, and was launched from Lihue.  An inversion is located between 800 and 850 millibars, or about 6,000 feet.  Wind barbs are plotted along right right side.  While not all the wind observations were included in this image, you can see 10 knot northeast winds below the inversion, and 10-15 knot west-southwesterly winds at and above the inversion.  In a situation like this, a change in altitude of a few thousand feet could change a headwind into a tailwind for a pilot, saving time and fuel.

Since it has such an impact on our weather, forecasters will likely talk about the inversion in the Area Forecast Discussion, including information from the latest upper air soundings.  (Weather balloons are launched twice a day–at 2 am and 2 pm HST–from Lihue and Hilo.)  If you want to get into the specifics yourself, these upper air profiles are available in real time from the University of Wyoming and the National Center for Atmospheric Research websites.  The NCAR website provides static links for it’s data, so you can view the latest soundings from Lihue and Hilo.