This project is now complete. Runway 4L & 4R are re-opened.

Please watch the latest video from the FAA that describes the changes, and the safety concerns operating at HNL.

As many local pilots know, the Runway Safety Areas for these two runways have overlaped in the area between the two runways, creating an unusual hold short configuration on Foxtrot, Echo, and Delta taxiways that requires the pilot to hold short of the FIRST hold short line they encounter, continuing to block the just exited 4 Left runway.

This procedure was in effect for several years, and has been a major source of confusion and Runway Incursion issues at HNL.

The first part of this change required reclassifying runway 4 Left from a runway capable of landing small turbojets to one suitable for turboprops and smaller. This change allows the Runway Safety Area for 4L to be reduced, no longer overlapping with 4 Right. The change took effect earlier this year.

The next part of the change has realigned the hold short lines, eliminating the overlap and creating a more “standard” configuration. Here’s an example of the change for Taxiway Foxtrot: 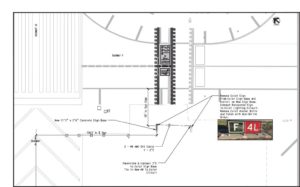 Here, you can see the new hold short lines in bold, and the old hold short lines in outline, which will be eliminated. Note there will be a 10 foot space between hold lines where a small aircraft or ground vehicle could hold clear of both runways, but in most cases, aircraft will NOT be able to completely clear 4 Left after exiting, just as today.

Pilots will continue to be expected to hold short of 4 Right, until specifically cleared to cross it.