A lot has been written about the various competing flight planning, weather, and traffic apps for the iPad or iPhone, especially FlyQ EFB and ForeFlight. Since all manufacturers are eager to improve their products and new versions are released regularly it is difficult to keep track of the very latest reviews. I initially locked into FlyQ EFB, which was marketed by AOPA at the time and advertised it’s compatibility with a number of different ADS-B receivers on the market, whereas both ForeFlight and GARMIN force the customer to buy a specific product brand. Admittedly, my loyalty to an organization that has never given me second-rate advice and has been professional through decades of membership was another major factor in my decision. At the time, I was still the owner of a GARMIN 696 handheld electronic flight bag and my decision not to purchase the matching GARMIN GDL-39 ADS-B receiver was determined by the fact that I would also be forced to subscribe to the matching ‘GARMIN Pilot’ App. At that time, the app did not have stellar reviews, whereas there was a recognizable stampede towards FlyQ and ForeFlight. I have used FlyQ EFB extensively for VFR and IFR flying in the islands and on the mainland, and I have zero complaints about any aspect of the program. However, I finally also subscribed to ForeFlight for a single but important reason: the search-and-rescue pattern generator, which I frequently use when flying first-light search missions for the Coast Guard Auxiliary. Sure, this feature concerns a very small community of aviators but I no longer have to manually transfer 10-20 Lat/Long coordinates of a parallel search track from a print-out to the GPS unit in a dimly-lit hangar at 5:00 AM in the morning. On more than one occasion the navigation system wanted to send me 2500 NM into the southern hemisphere because of an entry error. ForeFlight only asks for the main parameters of the pattern and generates a search track. It is quick, easy, and safe. 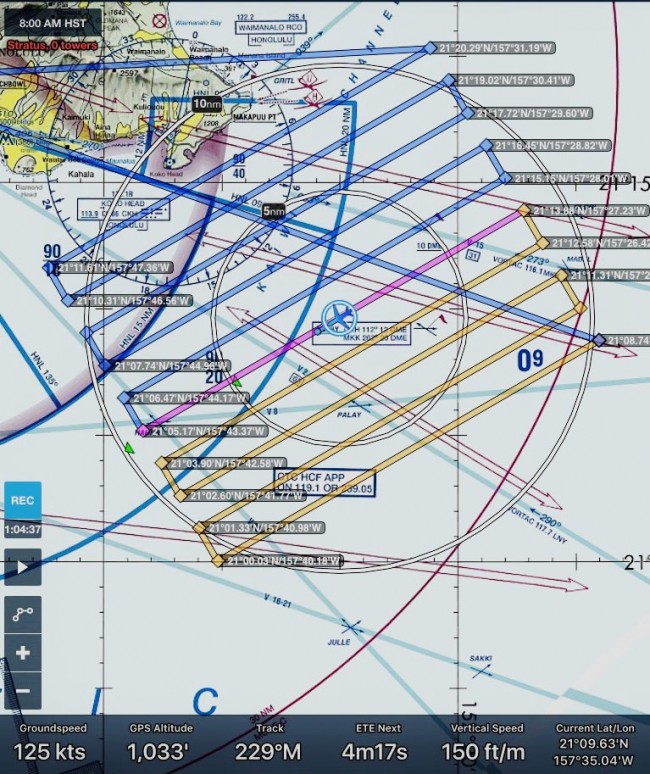 Another important feature has me somewhat baffled, though: the radar weather display in ForeFlight vs. FlyQ EFB. The former produces a crisp outline of detectable moisture or precipitation with color coding of the return intensity, whereas FlyQ EFB displays a somewhat more diffuse but sensitive image that invariably covers more real estate than ForeFlight. An alternative is the satellite view in ForeFlight (it is not clear whether this infrared, visible, or a compound picture) which more closely resembles the FlyQ EFB picture (which also provides the option of superimposing both infrared or visible satellite images). We always read that radar returns do not necessarily represent visible moisture such as clouds or fog, but the data source of FlyQ does so to some extent. I have compared the radar image from the National Weather Service with that of both ForeFlight and FlyQ EFB, and it more closely resembles that of ForeFlight. It is in the nature of Doppler radar that it can display meteorological phenomena that are not precipitation (e.g. temperature boundaries and wind) and the difference in display is likely due to processing of raw data obtained from the NEXRAD network. An in-depth, albeit rather technical description of weather radar can be found here. It is worth looking at the important distinction between base reflectivity versus composite reflectivity explained here, and on Wikipedia.

I communicated with ForeFlight technical support about this issue and the first suggestion was to check the connectivity of the iPad with the STRATUS ADS-B receiver. The images used on this page were obtained strictly from internet data while on the ground but hey are representative of what I see in the air, with the iPAD in airplane mode (with wireless feature turned ON) and using the STRATUS I receiver. The ForeFlight meteorologist commented: “… likely has to do with where the dBZ cutoff is. ForeFlight uses 5 dBZ. dBZ values actually go negative since it’s a logarithmic function. So, the other app [FlyQ EFB] could be showing values down around -5 or 0. If true, this will cause more unnecessary clutter especially if the other product is a composite reflectivity image.”

One might argue that the combination of the radar imagery and the satellite view gives a better picture of cloud cover versus precipitation than what appears to be a hybrid image. I just got used to the FlyQ EFB view and I have learned what to expect by comparing the view out of the window with that on the screen. Part of this learning process is to also know that radar images are a couple of minutes old by the time they are displayed in the cockpit. I found it difficult to obtain a number based on data, but the consensus on various sources seems to be 5-20 minutes. This can make a significant difference to what you see out of the window if you are in the vicinity of a fast-moving front or cell. Significantly, ForeFlight indicates the direction of movement of a cell (see center picture above). Of course, a complete mental image of the actual and expected weather conditions can only be gained by obtaining METARs, TAFs and other real-time information such as PIREPs. As PICs we are obliged to obtain all available information concerning a planned flight and also have an alternative strategy if the flight cannot be completed as intended.