I know it seems like I keep saying this but the past quarter has been VERY active.  It started with the meeting with Ross Higashi, Deputy Director of Transportation, where he announced a significant airport facility rate increase.  In subsequent discussions with Ross after he announced the postponement in the rate increase until April, Ross asked the appraiser to review the appraisal’s methodology and calculations.  At this time, no announcement has been made regarding rates.  In January, AOPA came to a town hall meeting to discuss what AOPA has been doing to support aviation, especially on the local scene.  I was not at that meeting (I was on a previously booked and well deserved vacation) but my understand is that local issues were not fully discussed.  You will be seeing an AOPA town hall meeting again in the future, this time off airport property.

January started the legislative process.  GACH through very supportive legislative members introduced four bills into the process.  Two bills (one for the House and one for the Senate) asked for a change in the law (HRSs) that created criminal violations for people at the airports who commit minor offenses.

These bills had to be heard by the House TRN, JUD and FIN committees and by the Senate TRE, JUD and WAM committees.  With great written and oral support from GACH members through testimony and several GACH Board of Directors present at the hearing, both bills made it through both houses.

Now these bills will cross over to the other side for their respective vote.  We are about 60 percent through the process to hopefully have a new law for the Governor’s signature.

DOT initially opposed the bills but now is supporting our bills.  OUR job is not done yet and need all GACH members to contact their representatives (and the Governor) asking for their help in bill (SB1163 and HB1184) passage.

The other two bills were GACH’s input to ensure people with aviation experience sit on the new Airport Corporation (Authority) board and countered bills that DOT submitted.

The two bills supported by DOT called for board nominations from many field, to include aviation.  GACH feared that the DOT bills could result in all board members from other than aviation (like all tourism).

There were many bills dealing with aviation this legislative session ranging from GET exception, aviation fuel tax increase, aviation flight school oversight, lasers pointed at aircraft and UAVs.

The best way that you can stay informed on all the bills is to go to www.capitol.hawaii.gov and set up an account.  After an account is established, do a keyword search and set up notices to be emailed to you.  This way you can become more involved.

AOPA has been a big supporter of GACH and Hawaii aviation.  Besides having the AOPA President attend the town hall meeting, the AOPA Western Region representative flew over to give written and oral testimony for our bill (in fact one AOPA trip was less than 24 hours).

The Hawaii Aviation Caucus was designed to have a group of legislative supporters (both from the House and the Senate) meet together to understand and support aviation.  The Caucus is co-led by Representative McKelvey and Senator Kahele.  There were 13 legislators attending the first meeting where they heard from AOPA, NBAA, GACH and local aviation businesses and pilots.  A second meeting is planned for April 2017. 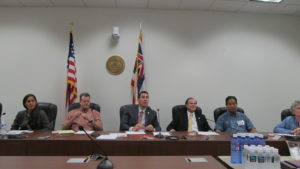 Despite meeting with DOT leaders, GACH still gets surprised by their announcements.  After working with many people fromFAA, DOT, safety and engineering to design a better system at Honolulu International Airport to help mitigate runway incursions, GACH was surprised when DOT unilaterally announced that they plan to temporarily close runway 4L/22R to reduce runway incursions.  While an option, the closing of runway 4L/22R was the least favored by both the formal HNL Geometry study commissioned by DOT and the RSAT committee members and was at the very bottom of the option list due to costs and negative effects on aircraft operations.

GACH wrote to the DOT Director asking why he supported this least favorable option.

There are also airspace changes being made by the FAA.  GACH learned late in the process what these changes were and have suggested changes that accommodate the required FAA plans but allow for minimum GA impact.  The changes were mostly driven by requirements changes in circling minimums and terrain clearance.  You'll find the latest information here: HHI and MKK airpsace changes

Besides bill passage, GACH is very much focused on minimizing facility rate increases and changing the revocable permit (RP) terms and process.  There is a lot to do but with minimal resources, GACH must focus.  We always ask for help—the adage of “many hands helping make light work” rings true.

On the fun side of the things we do, GACH had a great Pancake Breakfast at HNL.  Thanks to Joe Kiefer and his gang, we all enjoyed great pancakes, eggs, bacon, coffee and orange juice and an opportunity to talk aviation with friends.  In the event planning, GACH is proposing the Hana Fly In May/June and a Hilo Fly In for October.  Remember these events are FREE to GACH members—$20 for an annual membership (or $10 if under 25 YOA) there is not a better deal to be had.  So please if you or your business is not a member of GACH, please join NOW.

I also say farewell to Bill Strayer as a GACH Board of Director and welcome our first board member from Kauai, Mike Olson and Mike Singer from Hawaii Island.  Our next Board of Directors meeting will be April 29 and all GACH members are welcome to attend.

Remember: Keep the shiny side up.

Next Newsletter Article
Posted in GACH and tagged winter2017news.