The inhabited Hawaiian Islands (Hawaiian: Mokupuni o Hawai‘i) at the eastern end of the archipelago are separated from each other by channels between 9 NM and 60 NM wide. It is therefore impossible for a GA aircraft to glide to safety from a mid-channel position in the event of a power plant failure, even if a suitable landing field were available near the shore (much of the Hawaiian coast line consists of rocky cliffs or densely populated areas). It is therefore imperative to carry rescue equipment and to take precautionary measures that would make it easier to be found in the event of a ditching or forced off-airport landing.

Much has been written about ditching and techniques to increase the chances of survival of a water landing. The good news is, that numerous people have survived ditching in the ocean near Hawaii and lived to tell the story. The few cases where tragedy ensued were mostly based on the lack of preparation or adequate life-saving equipment (see, for example, NTSB Safety Recommendation A-99-057).

First of all, filing of a VFR flight plan is highly recommended and often mandated by flight schools. In addition, in Hawaii the Flight Service Center (FSS) offers an ‘island reporting service’, encouraging pilots to report specific waypoints or positions along their route to make it easier to pinpoint the possible position of an aircraft in the event the pilot fails to report. An alternative or supplemental strategy is to request ‘flight following‘ from air traffic control (ATC). This can be accomplished by asking for the service upon hand-off to departure control after taking off from a controlled airport, or by contacting one of the Air Route Traffic Center (ARTCC) controllers on the appropriate frequency and requesting ‘radar advisories’. This implies that ATC monitors the position of the aircraft much like an IFR flight and offers the added safety feature of putting the crew in immediate contact with ATC at all times in case of a problem. On the other hand, flight following is a voluntary service offered by ATC on a work-load permitting basis and is naturally limited by radar coverage. Invariably, radar contact is lost in the vicinity of the bigger islands at altitudes usually maintained by sight-seeing flights prompting the controller to advise ‘Radar service terminated – squawk VFR ‘. Pilots frequently elect to stick with flight following since juggling two frequencies (ATC and FSS) at the same time  can be stressful. The ‘Departure’ and ‘Center’ controllers expect that pilots monitor their respective frequencies continuously when requesting radar following since they also provide traffic advisories. Pilots are well advised to alert controllers when they change frequencies to talk to FSS, lest they want to risk unilateral termination of the service. However, once radar service is lost it is not too late to open an existing flight plan. FSS frequencies are monitored in most areas around the islands from remote connected outlets (RCOs) and voice communications can be received on several VOR frequencies.

At minimum, aircraft for hire must provide a life preserver for each occupant by law when flying over water outside gliding distance to land (FAR section 91.205(b)(12)) . These are usually found under the seat of rental aircraft and are sealed for protection. In the event of an emergency, the plastic covers must be removed and the life vests donned quickly. Obviously, the availability of personal life preservers and other rescue equipment must be confirmed as part of the preflight, and the procedure must be thoroughly briefed with passengers beforehand. By the same token, it is essential to instruct passengers NOT to inflate the life preserver until clear of the airplane in case of a water landing. It is also obvious that the pilot will be unable to perform this task while controlling the aircraft, for which reason it is highly advisable for the PIC to wear a life preserver while flying as a precaution. While this is not required by law it makes a significant difference to the chances of surviving extended times at sea. Whilst they do not replace the legal requirement to have life vests on board , rafts are a practical solution for over-water flights in small aircraft and are available for rent at many flight schools in Hawaii. 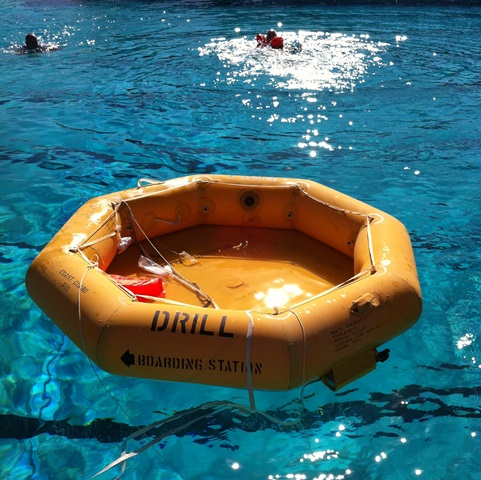 8-person raft inflated. While it supports a lot of weight, this kind of raft leaves the occupants exposed to wind and swell and is not trivial to board.

They do not necessarily have an integrated canopy and they are difficult to climb into. Most importantly, one of the crew or passengers have to be in charge of extracting the raft from the aircraft in case of a ditching and it must have a place in the airplane where it can be easily reached in an emergency. Once inflated, a raft behaves like a sail in strong wind unless weighted down, and may be difficult to control or to follow by an average swimmer. The cost of a raft can be well over $ 2000. In addition, it has to be inspected for leaks every other year, and the CO2 tank has to be tested and re-certified, all of which is a considerable investment. For the pilot without her own airplane it may be worth renting this equipment rather than own it. Rafts also weigh over ~ 15 lbs which must be taken into account for W&B purposes. The military and the Coast Guard recently introduced one-man rafts with integrated canopy. This puts each individual in charge of their own survival equipment and is also quite expensive at ~ $ 1000 for a single raft. 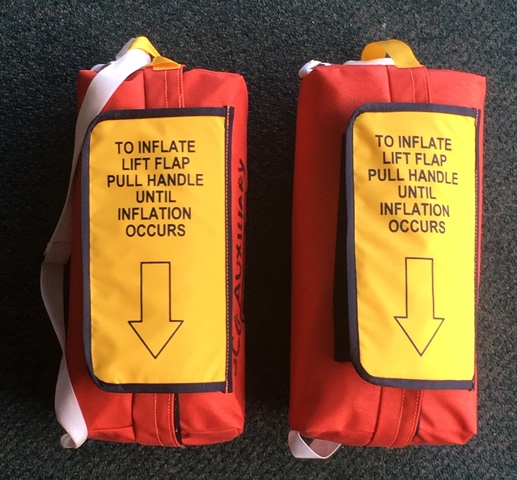 One-Man rafts as used by the US Coast Guard and the military are relatively light and small. They can be worn around the waist. These rafts come with integrated canopies and provide reasonable protection from the elements. Unfortunately, these rafts are expensive.

Many pilots also carry additional signaling devices such as mirrors, strobe lights, flares (mandatory in aircraft for hire), streamers, and whistles. Especially a signaling mirror, flares, and/or an electric strobe light increase the probability of discovery significantly and can be carried in the pouch of a vest-type life preserver.

Probably the most effective tool to increase the chances of a quick discovery and rescue is a personal Emergency Position Indicating Radio Beacon (EPIRB) that broadcasts the GPS position of the user on the 406 Mhz emergency frequency when activated. These devices are available from several marine equipment suppliers, they are relatively cheap, and they are small enough to fit into a pocket. Every crew should carry at least one. EPIRBs have to be registered with NOAA so that an activated beacon can be linked to a specific owner, which makes it easier to distinguish false alarms from real emergencies.

Rather than describing specific ditching techniques here, I refer to the relevant sections of the Airman Information Manual (AIM) and several authoritative on-line articles on the subject which are listed below. The important factors of a successful emergency landing are equipment, planning, and thoughtful execution. Thinking about the unthinkable provides at least some immunity against panic in the event of an actual emergency. A cool and collected aircraft commander instills confidence in her passengers, which is an important ingredient of surviving an emergency. It is obvious that egress and emergency procedures be thoroughly briefed. The pilot has to strike a delicate balance between describing a ditching in sufficient detail to instill important procedural steps in her passengers, while avoiding overly dramatic depictions that may scare passengers and create anxiety.
Thanks to good planning, communication with the Coast Guard, and an airframe parachute system, news of a pilot surviving a ditching north-east of Maui made it around the world in early 2015. The pilot was ferrying a brand-new Cirrus SR22 from Monterey, California to Maui when he ran out of fuel short of his destination. The video documentation of the parachute deployment and the subsequent uneventful touchdown of the aircraft certainly provided the manufacturers of the parachute system and the aircraft with impressive advertising potential. The pilot was picked up a short time later by the tender from a nearby cruise ship. Given a choice, I would rather use this method to ditch than having to actually land an aircraft in the ocean, especially when waves and swell can make this a violent experience.

Almost exactly one year earlier a commercial flight of a single-engine Cessna 208 Grand Caravan with eight passengers experienced a power failure shortly after take-off from the airstrip of Kalaupapa on the island of Molokai. The pilot Clyde Kawasaki did an exemplary job of setting the aircraft down and briefing his passengers. The video shows passengers donning their life preservers and exiting the aircraft. Everybody made it out of the aircraft alive. Sadly, one of the passengers died from a preexisting heart condition.

AOPA Staying alive: Survival training for after a ditching