GACH’s third annual Molokai Fly In was held on Sunday February 21, 2016. Unfortunately, Mother Nature also chose February 21st as the day to bring us heavy clouds and rain in the Molokai Channel and over the west end of Molokai and sustained winds at Honolulu in the 20-25 knot range:  A definite IFR day. Never-the–less, seven aircraft and 19 people did make it to the event. The six aircraft from Honolulu all flew IFR and Bill Baldwin made it from Maui under VFR. 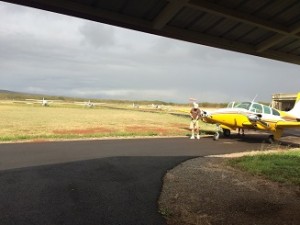 Arriving aircraft tied down close to Steve Notman’s beautiful self-built hanger adjacent to the threshold on Runway 17. Steve hosted everyone for coffee, breakfast cakes and lots of good hanger talk while awaiting GACH’s 7-person van shuttle to the Kualapuu Cookhouse for breakfast. Most spent a couple of hours at the Cookhouse talking and eating. Our weather luck did hold somewhat.  Both the Molokai Airport and the Cookhouse area had blue skies and light winds which made life easier for everyone. 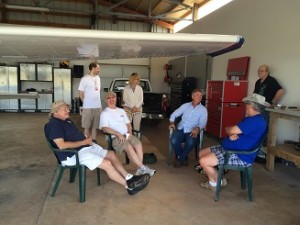 The general consensus was that the Molokai Fly In is a good time for those participating and should be repeated next year.  The trick of course is to pick a day that is going to be mild VFR.