The return of visitors to the islands and the associated increased frequency of arrivals of carriers has seen a return of traffic congestion of VFR airplanes approaching Honolulu. At the same time, pilot training has picked up again leading to occasional traffic backup for the NORTH SIX arrival. Increased Pearl Harbor helicopter tours add to this issue.

HCF approach controllers have no choice but to delay Class B entry clearances until one of the two runways (4L, 4R) is available for landing of VFR aircraft and Ford Island is not congested, either. Of course, VFR aircraft also converge on the airport via the FREEWAY arrival from the east which demands a well-tuned strategy on the part of ATC – not unlike juggling with a dozen different-sized objects.  VFR arrivals from the north and west are frequently told to hold over the H1/H2 interchange after receiving a transponder code. If there are additional arrivals from the east, those may be also told to hold at the Waialae golf course or they may be sent to the H1/H2 interchange before a clearance is issued. The necessity to separate VFR and IFR traffic demands that VFR aircraft are kept outside Class B airspace until there is a clear path for them to land. It is, of course, problematic that arriving aircraft will be more or less at the same altitude, following published procedures, and ATC can only provide advisories to VFR aircraft on a workload permitting basis. The announcement of “numerous aircraft in the vicinity of the H1/H2 interchange” must alert anyone that there is an increased risk of a traffic conflict while you are waiting for a clearance. HCF is obviously doing their best to keep everyone safe, for example by providing advisories about altitudes to hold but in the end it is the pilot who has to make decisions. ADS-B alerts have limited value while you are in a continuous turn and you should be looking out of the cockpit for traffic and make sure you don’t stray from and assigned or chosen altitude rather than staring at your iPad. Consider also that there may be student pilots in the fray that may not have the skill level demanded by this situation. 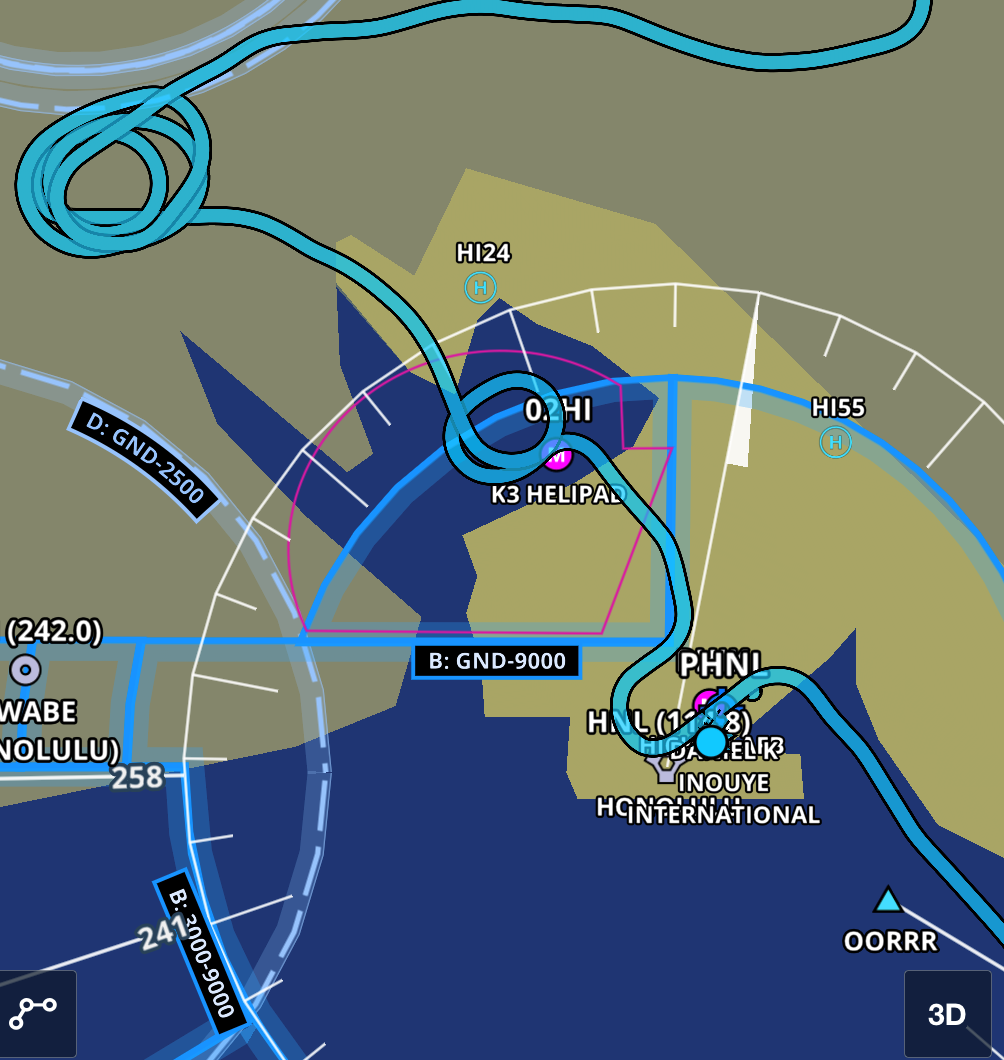 Holding pattern near the H1/H2 interchange and subsequent hold over Ford Island for spacing.

One of the upcoming FAA safety meetings (July 20th) will feature a Pilot-Controller Forum focusing on the H1/H2 interchange and South Practice Area safety.

Here are some strategies that may help you avoid congestion and focus on early traffic recognition and avoidance: